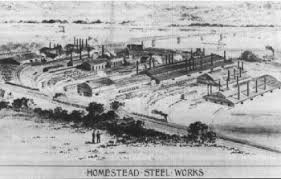 As the 20th century neared and the American economy was undergoing continuous transformation, all was not well between labor and management.  The growing industrial labor force that helped power new industries and the many factories that came with them was experiencing long hours at low wages.  In this time of little government interference, management often sought out any way to keep profits rising.  Twelve hour work days, six-day work weeks and wage cuts were the norm.  Exhausted workers, tired of working in dangerous conditions for low wages, began to band together to force employers to treat them more fairly.  Such was the case at Andrew Carnegie’s steel plant in Homestead, Pennsylvania. 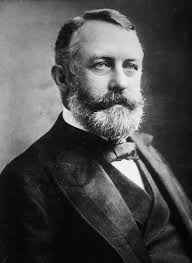 Click for clip explaining Carnegie’s involvement in the strike

By 1890, Andrew Carnegie was the richest man in America, with an estimated net worth over $100 million.  His company, Carnegie Steel, was the largest steel producer in the country.  In the winter of 1891, the Homestead Mill, located in Homestead, Pennsylvania, became part of Carnegie’s steel empire.  Carnegie and his associate, Henry Clay Frick, had defeated the union at their other factories.  Despite his public stance as a champion of labor, Carnegie was determined to break the Amalgamated Association of Iron and Steel Workers at Homestead.  He hated how this craft union, not even inclusive of all workers, dared to decrease the efficiency of one of his plants.  Facing one of the strongest craft unions in the country, he had a difficult task.

Not wanting to dirty his hands and soil his reputation, Carnegie tasked Frick, the violently anti-labor General Manager of Homestead, with cutting wages and breaking the union while Carnegie vacationed in Scotland.  Anticipating the expiration of the union’s contract at the end of June, Carnegie and Frick schemed to produce as much steel product as possible in the spring of 1892 in order to weather a strike.  Frick also fortified the mill with a three-mile long, 10 foot high wall topped with barbed wire.  With his fort complete and large inventory on hand, Frick planned to shut down the plant and wait for the union to buckle if his terms for a new contract were not accepted. 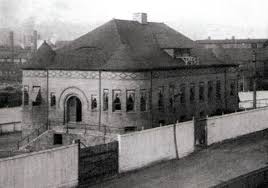 As negotiations on a new union contract began, Frick announced his intentions to slash wages and cut jobs.  Neither Frick nor Carnegie expected the union to accept these terms.  They were correct.  As the end of June neared, Frick began to close the mills at Homestead and lock out the workers.  Then, on June 25th, Frick declared that he would no longer recognize the union and would only negotiate with individuals.  The workers at Homestead were willing to bend on almost every issue during negotiations but they were not willing to disband their union.  Management had acted on the belief that employees would abandon their union to save their jobs.  They had not anticipated the resolve shown by the workforce at Homestead.

On June 29, Frick locked out all 3,800 employees at the mill.  Only 750 of the 3,800 workers belonged to the craft union, however, over 3,000 met and voted overwhelmingly to strike.  They guarded the plant all day and night, not willing to allow management to employ strikebreakers to run the mill.  Strike leader Hugh O ‘Donnell did not want any violence but the union members would not allow any scabs into their factory.  In response, Frick hired the Pinkerton National Detective Agency, a private police force with more men and guns than the U.S. military.  They were to protect the non-union scabs that would be hired to run the factory.  Frick thought a show of strength and resolve was all that was needed to break the workers. Again, management badly miscalculated.

On the morning of July 6, 1892, a tug pulled two barges containing 300 Pinkerton men down the Monongahela River.  They were preparing to secure the factory via a river entrance.  Union members and townspeople, tipped off about the arrival of the Pinkerton men, gathered by the thousands at the mill to prevent the agents from taking over the factory.  It is not known who fired first, but a fierce battle ensued when the Pinkertons attempted to take the mill.  Workers frantically tried to sink the barges.  They soaked a raft with oil, set it on fire and sent it afloat in an attempt to burn the agents out.  They tried to ram the barges with a burning rail car.  They employed dynamite and cannon fire.  The tugboat left the barges to ferry out wounded men, leaving the remaining agents stranded.  Several Pinkerton attempts at surrender were denied.  During this fighting, union leadership tried to defuse the situation behind the scenes but Frick would not bargain. He knew that the more chaotic events got, the better chance militia would be dispatched to safeguard his factory.  Finally, after more than twelve hours of brutal violence, surrender was negotiated with the safety of the Pinkertons promised.  Three Pinkertons lay dead and 9 workers had been killed or mortally wounded.

Despite the promise of safety for the Pinkertons, they were forced to walk through a gauntlet of angry townspeople on their march from the mill to Homestead.  During this walk, they were beaten badly with fists, rocks and clubs.  Many were seriously injured.  This beating and the subsequent reporting of it by the media turned many citizens against the strikers.  Upon arrival to the town, they were put into the jail for their safety and whisked away to Pittsburgh by train at night.  Despite assurances to the union that they would be prosecuted for their crimes, the Pinkertons were released by state officials without facing any charges.

Under pressure from Carnegie Steel and the Carnegie-backed political machine that helped to elect him, the governor of Pennsylvania ordered the state militia to Homestead to break the strike.  On July 12, 8,500 militiamen arrived by rail and quickly took back control of the plant.  Strikebreakers arrived by train and took over work in the mill.  By August, the factory employed 1,700 scab workers and the mill was running as usual.  The strikebreakers lived on mill grounds, as the town of Homestead was a dangerous place for them.  The strike continued on, with union requests for renewed negotiations ignored by Frick.

An assassination attempt on Frick by anarchist Alexander Berkman further undermined public support for the strike.  Although Berkman had no connection to the union, sympathy for the strikers had been eroded.  Strike leadership fell apart and workers went back on Frick’s terms.  The strike had failed and the union collapsed.  All strike leaders were blacklisted. Many strikers were arrested but sympathetic juries convicted none. 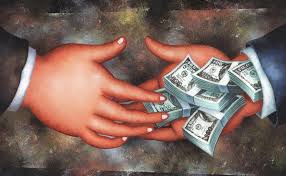 The crushing of the union during the Homestead Strike of 1892 was just one of many clashes between labor and management around the beginning of the 20th century.  It was representative of many of the battles, as big business, with political and judicial backing, often triumphed over organized labor.